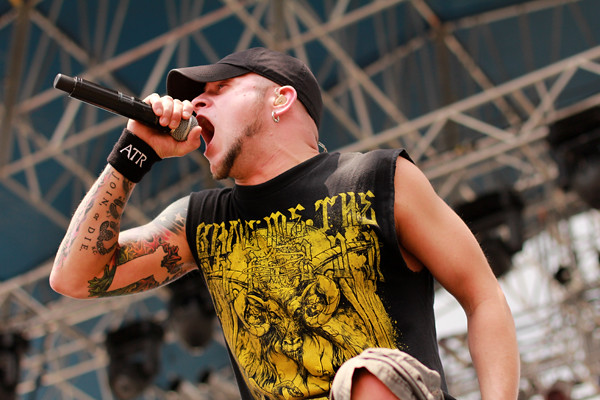 All That Remains vocalist Philip Labonte is known for having a pretty wide vocal range, but he is also infamously known for speaking his mind. There’s nothing wrong with that, the internet is a place where you’re free to say whatever you damn well please. Given that someone like Phil is in the spotlight that can come back to bite you in the ass and when you are Phil that tends to happen. If it’s not because of his political views it’s because of some other inciteful thing he posts. Such is the case with the following status he shared:

“So in the past six months bleeding through called it quits, god forbid called it quits, and just today shadows fall has announced that for all intents and purposes they’re calling it quits. I’m so glad ATR have transcended “metal” and have become ‘musicians.'”

People flipped out and he responded to one comment saying:

“I’m not commenting on the quality of the music they made. All three bands have written great great music. But I feel like they didn’t push their song writing past what is acceptable by their fans. And so they didn’t evolve.”

People continued to flip out and eventually he followed up with another status:

“Guys, that last post was about ‘metal’ and it wasn’t about the quality of the bands mentioned. It was a reflection on how arbitrary and fickle ‘metal’ fans are. Stop lookin for hate.”

I can see how this may have been taken the wrong way but I honestly don’t think that was his intent at all. He may be opinionated but I’ve never picked up on a “jerk” vibe from the guy. I think his status wasn’t worded properly and definitely taken out of context by many.

NOTE: The following are my thoughts on what happened here, the actual story is done. Unless you’re curious about what I think read on, otherwise I encourage you to check out another story.

I’m not one to post my opinions as I feel that articles should be written objectively but here’s my interpretation of what he said:

The word “transcend”, like many English words, has multiple definitions. Two of which are “To be greater than, as in intensity or power; surpass” or “To pass beyond the limits of”. My guess is that Phil meant the latter because in a sense they have. Let’s face it, they’re not exactly death metal. All That Remains is commercially successful, they get radio airplay, bottom line: they’re a pretty accessible band. In that sense they have passed beyond the limits of your typical straight metal band. When you consider the bands he mentioned, I can’t recall ever hearing any of them on radio service that wasn’t paid for. I really don’t think he was trying to say that his band is better than anybody else’s or that they’re pushing the envelope of what metal is in today’s day and age.

Then you can connect his second and final comments together. Regarding bands not pushing the envelope, that can cause a lot of fans to bail on a band because they might get bored with what the band is doing. Then you have people that jump ship because they follow trends and since what the band isn’t doing is what’s “in”, they abandon them. There’s also the case where a band makes one album that fans aren’t fond of and they jump ship because of it, never looking back. Metal fans are most certainly fickle. Sometimes it seems as if there are only certain bands that are allowed to drastically change their sound without repercussions, while others try doing something different and they get labeled sellouts, “not metal,” or some other derogatory title.