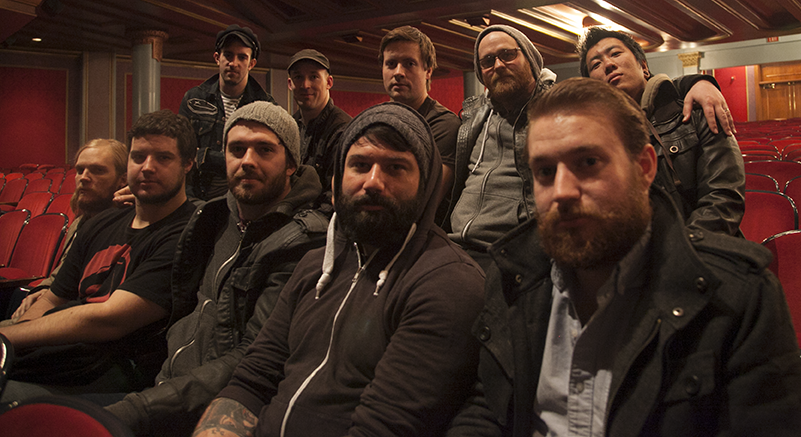 The band commented on their reunion:

“In May of this year, we celebrated the 10 year anniversary of the release of our first studio album Burning Bridges. Needless to say, the experience brought a lot of memories back for all members of Haste the Day, past and present. After the gig, Stephen (vocals), Mark (long-time friend and manager) and I (Mike) started talking about what it would look like to put out another album. Needless to say, this was a complex decision making process, but something we all wanted to do.

As is the case with all things in life: if something is worth doing, it’s worth doing right! So we spent a lot of time determining the best way to make our 6th full-length studio album. Who would write, who would perform, how would we involve all members of the band in the project in one way or another?

You see, we are all friends & brothers and so we wanted to give all the guys an opportunity to participate in one way or another. At the same time, we want to make the best album we can, one that would thrill fans of all eras of Haste the Day.

So, here’s the scoop: Stephen, Jimmy, Brennan, Scotty, Mike, Giuseppe will be the core writers for the new album, which has yet to be named. Dave will be providing additional writing input as well as helping with guitars and guitar tone during the recording process. Stephen will be producing the album, which we will record in Nashville, Tennessee.

In addition, the Burning Bridges era of Haste the Day will also be writing and performing one song for the new album. For those of you not familiar with that album or the lineup that made it, Jimmy, Jason, Mike, Brennan, and Devin will be writing and recording the song for the album.

We have already begun writing the album and we will begin recording the album in January of 2015. Expect lots of video updates along the way. For all of our backers, expect to get glimpses of the new music as we demo the songs and prepare for the recording process.”

The campaign comes with some serious perks the best of which has to be the chance to OPEN FOR THE BAND! For $2,500 your band gets a 30 minute opening set on one of a select number of gigs the band will be playing next year.

Below is a video message for the campaign:

The band have also commented on their initial decision to break up in an interview with Alternative Press.

“I always loved being in Haste The Day. But there was a point, after so many member changes—especially when my best friend, [guitarist/vocalist] Brennan [Chaulk] left the band—it was really tough. Trying to keep things on track without him was difficult. We made Attack Of The Wolf King, which, in my opinion, turned out to be our best record. But after that I lost a little bit of the love for touring. It was still great. But it became more of a chore. It started to feel more like a “job,” and I never wanted to have that mentality. It spoiled it. As soon as I wasn’t feeling as much joy from going on the road, it felt like the band had run its course.

As a band–the members who finished Haste The Day – I felt proud of Wolf King. It just felt like it was time to do a farewell tour. It felt natural. If we had just kept going, I felt like I would have just been holding onto it, with a death grip. I don’t know how Stephen felt…”

“I was just tired. And I knew Mike was tired, too. All of the other guys were eager to keep on going, but Mike and I just had this feeling that it was time to go. I remember a conversation where we said that if [longtime manager] Mark [LaFay], Mike or myself ever quit, the band would be over. We felt we’d crumble without those pieces. So, when Mark emailed us to say he was leaving artist management–I remember, we were in the van. Mike and I just looked at each other after the email, like, “Well, it’s been a good run.”

Murphy also discussed why the band are crowdfunding the record and what to expect from the upcoming record:

“This is not a moneymaking thing. It’s not something we have to do. It’s something we became re-inspired to do. We all caught the itch again. Our passion is pure about it. We really do think we have all the right pieces in place to make the best Haste The Day record. I mean, I don’t know what the album is going to sound like, but I feel like… we don’t know what bringing all these pieces together is going to sound like. We’ve cooked with these ingredients independently of one another. But we’ve never put them all together. We don’t know how it’ll taste, but it’s probably going to be delicious.”